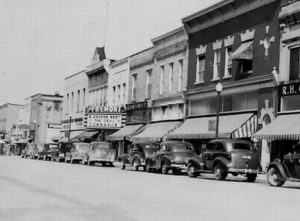 The Gerber family moved to Fremont from the Douglas-Saugatuck area. 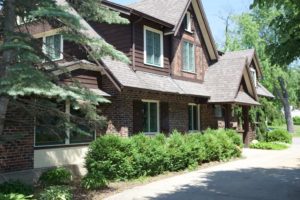 The Gerber Guest House was built for the Gerber family

Breezeway connecting the East and the West homes was built.

History of the Gerber Products Company

The story of the Gerber Product Company is one of enterprise, vision, hard work and ingenuity, resulting in success… Typical of the story of America itself.

In 1927, Dorothy Gerber was the busy mother of two little girls. The youngest was under the care of a Pediatrician for, in that time, advanced views concerning infant nutrition. His recommendation was the introduction of strained fruits and vegetables at about five months of age.

Following several months of the tiresome chore of preparing the baby’s food by peeling, steaming, scraping and straining, Mrs. Gerber felt there had to be a simpler way. She asked her husband, Dan, why infant foods could not be strained and canned at the Fremont Canning Company, an adult fruit and vegetable cannery operated by the Gerber family. While she was not knowledgeable about the inner workings of a cannery, Mrs. Gerber reasoned if the cannery could makes tomato puree for adults, why not pureed foods suitable for infants?

After a particularly disagreeable episode of forcing peas through a strainer, with peas everywhere but the strainer, Dan Gerber was ready to give Dorothy’s idea serious thought.Discussions with Dan’s father, Frank Gerber, President of the Fremont Canning Company, soon followed. Frank could offer no valid argument as to why mothers wouldn’t like commercially prepared foods for their babies. Being a man of vision, Frank Gerber gave Dan the go-ahead for the project.

Test packs were prepared for the benefit of Mrs. Gerber and several cannery employees who also expressed their interest in the new baby food. Their acceptance fueled the idea and after extensive research, along with consultation with Nutritionalists, Home Economists and Professionals from the Medical Industry, five varieties of baby food labeled, “Gerber’s” were ready for mothers in 1928.

In what was considered a daring and expensive advertising campaign, this new concept in infant feeding was launched that same year. The advertisement featured a coupon offering mothers six cans of the new baby food for the return of the coupon plus one dollar. Within days after the ad appeared, dollar bills began pouring into the Fremont Canning Company; within six months, Gerber’s Baby Foods were on store shelves in most major areas across the United States.

From these humble beginnings, Gerber Products Company evolved and today is recognized as the world’s largest baby food manufacturer, with sales exceeding one billion dollars. The original line of five products has grown to 220 and in addition, there are over 300 baby care items bearing the respected Gerber name.